It is easy to judge a homeless person based on appearances and write off their actions as another casualty of mental illness, something that has become prevalent to me while observing the interactions between the residents and homeless population of San Luis Obispo.

This was my first impression of Scotland, a 27-year-old man who approached me eagerly with the usual gimmick to make a couple bucks. However, after asking him for an interview, he dropped the facade.

Scotland has multiple tattoos all over his body, ranging from professionally done pieces to tattoos done by friends. His rule for tattoos is “if I give you a tattoo, you have to give me one.”

Overseas Experience
After moving from Scotland to San Luis Obispo over 16 years ago with his family, Scotland spent a vast majority of his adult life on the streets. “Even though I can stay with my Mom in Cambria, I choose to be homeless because I like traveling,” said Scotland.

In addition to spending time overseas, he has also been to:

Scotland commented on his frequent traveling and said “I want to see what I can see before it is gone. There are still 46 more states to see and I want to see all of that too.”

Scotland came back to San Luis Obispo three months ago after visiting the ocean and the whales in Seattle with his best friend Rocky. “I always end up back here because my best friends are here,” said Scotland. Patrick (right), is one of his friends that he spends time with everyday.

At the age of 22, he went back to Scotland to find his Dad. “The happiest day of my life was when I came back to San Luis Obispo after I tried to fight my real Dad. I wanted closure because he used to beat me. Instead of fighting me, he opened the door and came out with my sleeping bag instead of his fists,” said Scotland. He has not seen him since.

Living with a Terminal Illness
Generally, Scotland felt happy and content with his life despite his poor health.

“I was diagnosed with pancreatic cancer a year and a half ago,” said Scotland.

He was told he only had five months to live. Because he cannot afford any treatment for his illness, his only option is to wait. 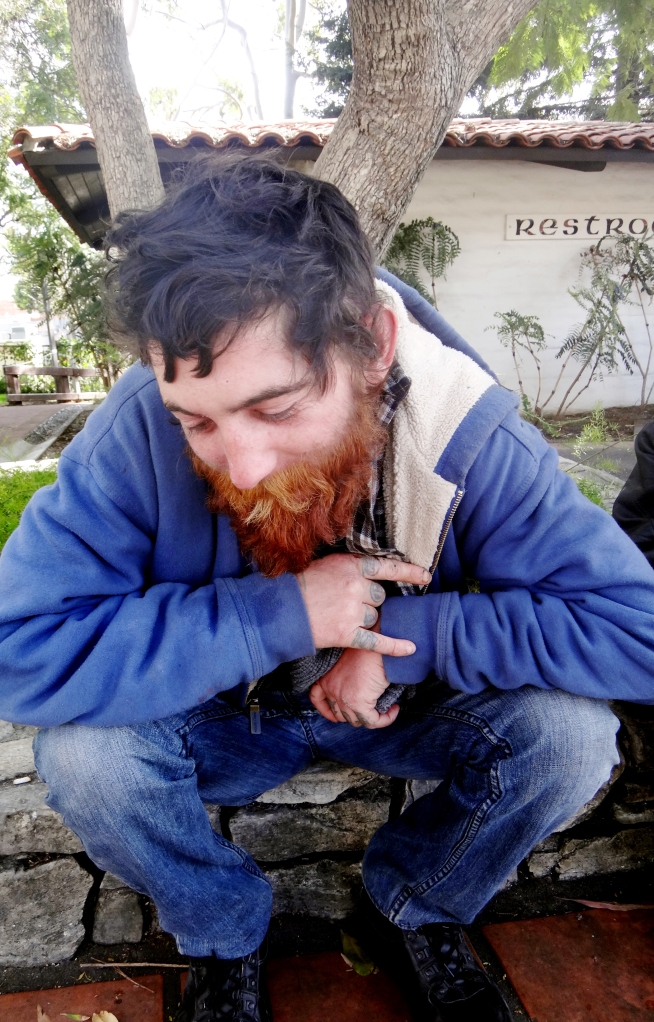 Scotland was born and raised a Roman Catholic, and was beaten by his Dad growing up. He was taught to not associate with Protestants, and considers his heritage a large part of his identity, “My Dad is Sicilian, and my Mom is Scottish.”

This experience has affected his day-to-day actions, sometimes even conflicting with his survival on the streets. “My biggest problem is that I hand all my stuff away. I give away anything that I have to other homeless people because that is how I live. I have always been that way,” said Scotland. Last week, he gave away two of his jackets to new street kids passing through downtown.

During the day, he is free to move around, unbound by the massive backpack and bedroll that burden other homeless individuals. It is only when the sun goes down that Scotland encounters problems with his generosity. He spends his nights sharing warmth with his friends, because he physically has nothing except the clothes on his back.

Scotland routinely spends the night sleeping next to his friend Squidward and his dog, Lucky. The pair have known each other for eight years, oftentimes being confused as brothers because of their matching scruffy beards.

Now, Scotland lives each and every day as pure as possible.

“My theory on life right now is that Mother Nature is my higher power,” said Scotland, “I can hang out with her under this tree and feel calm.”

Different Spheres of Interaction
Scotland and Stephanie Lafferty, the night supervisor at Cal Poly Kennedy Library, have never met. Nevertheless, Lafferty still has some experience into the life and times of homeless individuals in San Luis Obispo. She has worked at the library for over six years and interacted with numerous homeless people who visit the library. “We usually do leave them alone as long as they are not threatening students. I have no problem with them,” said Lafferty.

For the most part, the homeless individuals that visit the library just want to be left alone and sheltered from the weather. They want a safe place where they have access to:

Despite isolated interactions with the homeless individuals that do pass through the library, Lafferty does not treat them any differently than any other visitor at the library. “It is a matter of trying to treat them with enough respect as you can,” said Lafferty.

One thought on “What is Mine is Yours”